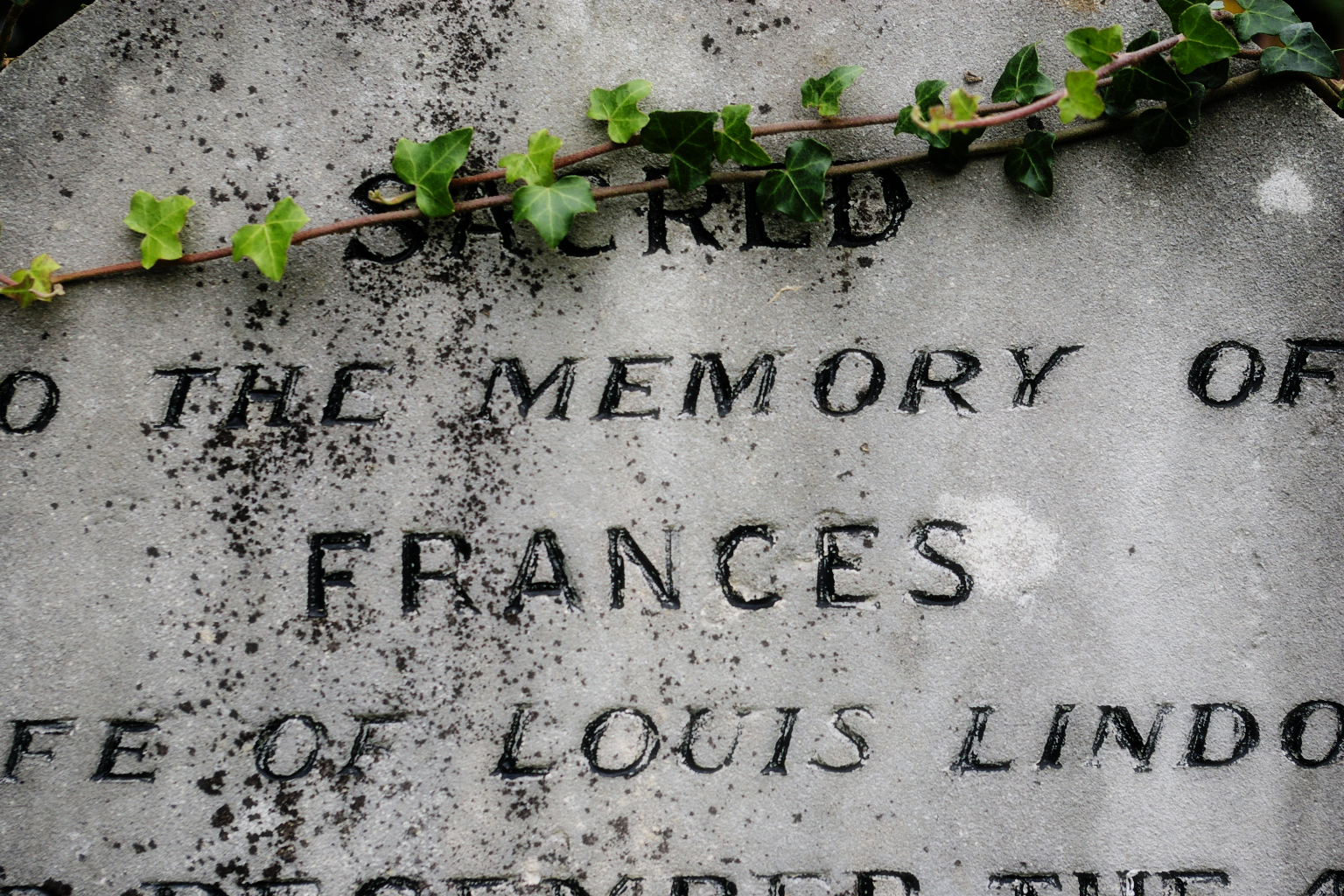 Brompton Cemetery is the resting place of Frances Lindon, better known to us and to Keats as Fanny Brawne.

Brompton Cemetery opened in 1840, and was originally known as the West of London and Westminster Cemetery. (You can still see this name over the entrance on Old Brompton Road.) It was one of the 'Magnificent Seven' cemeteries of the era, though I feel it is more modest in many ways than some of the others.

Keats' love and fiance, Fanny Brawne, mourned him for several years after he died in February 1821. Finally, though, on 15 June 1833, Fanny married Louis Lindo (later 'Lindon') and they had three children.

Fanny led a quiet life, and was discreet - even secretive - about her engagement to Keats. Her husband might never have even heard of it, if he hadn't been curious about a portrait of Keats that was displayed in the Dilkes' home, and she only told her children towards the very end of her life. Despite this, Fanny kept all her Keatsian treasures safely, and she wore his engagement ring all her life.

The headstone was originally inscribed 'Sacred to the memory of Frances wife of Louis Lindon', with the date of her death, and Louis's name and details were added below on his death.

Intriguingly, though, someone has since added the name 'Fanny Brawne' to the stone, with no further explanation. This wouldn't have been done in Louis's lifetime, and it seems to me unlikely to have been added by her children. It looks a little newer than the earlier engraving, but not much, and the letter-forms are slightly different. But the point is that someone, at some stage, felt the need to acknowledge her by the name that Keats knew and loved.

Brompton Cemetery is designated Grade I on English Heritage's Register of Parks and Gardens. It is the only Cemetery in the country owned by the Crown and managed by The Royal Parks on behalf of the nation.

The Cemetery has been popular with filmmakers, and can be seen in The Wings of the Dove (1997), Johnny English (2003) and Stormbreaker (2006) among others.

Unfortunately Fanny's grave isn't on a proper path, so you'll need to go off-piste if you want to visit her directly. It seems that many people do, as there is a fairly well-used track to follow. We probably shouldn't indulge too often - and we must be respectful of all the other people resting beneath our feet on the way. I have marked the spot on the map below, which I borrowed (without permission) from The Royal Parks' official website, and I offer the following directions:

Much of the Cemetery is easily accessible and all on the level, so it should prove a doddle to visit for just about everyone - though you need to be able to cope with uneven ground to read Fanny's grave.