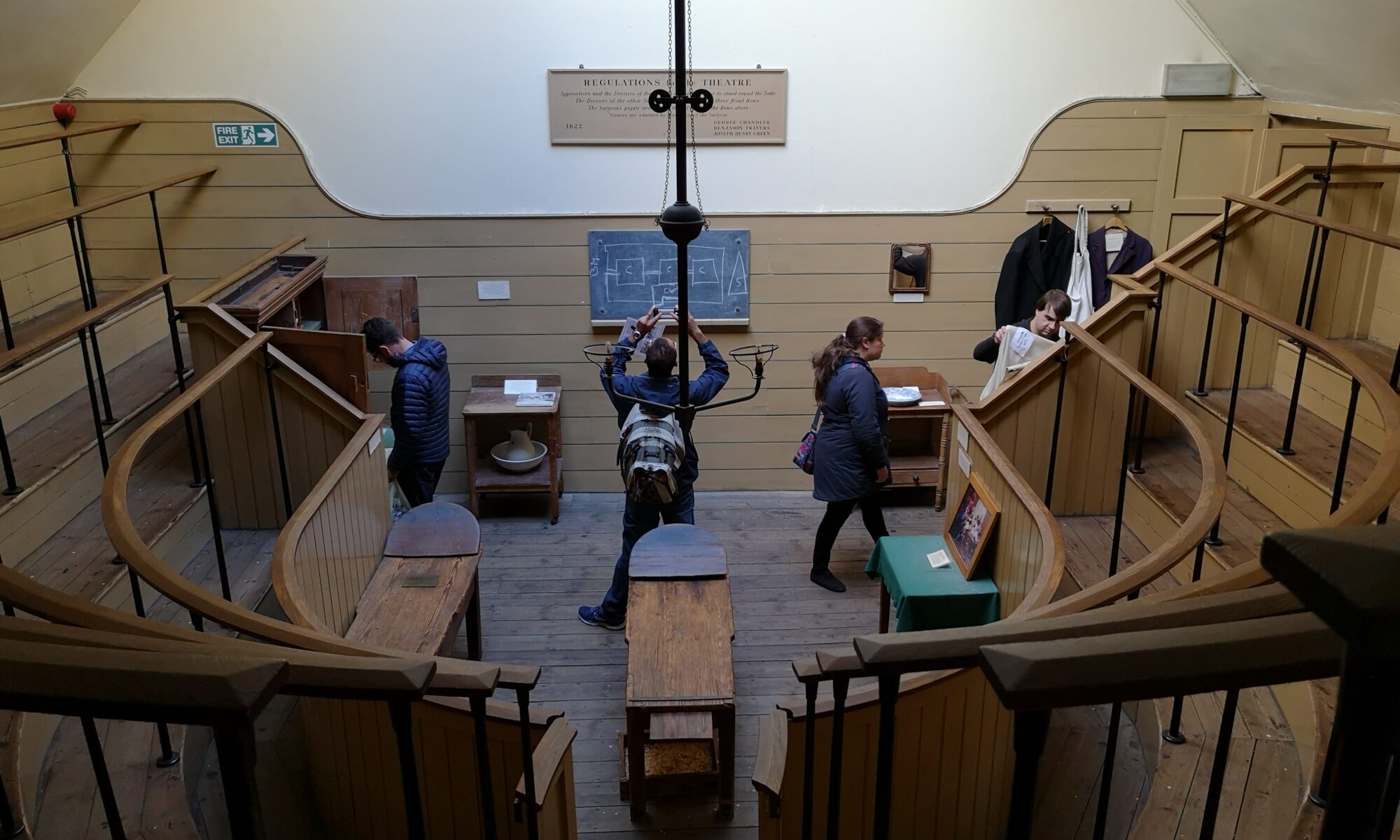 The Old Operating Theatre and the Herb Garret were part of St Thomas’ Hospital, which was associated with Guy’s Hospital where John Keats studied medicine. While the operating theatre was built the year after he died, Keats would have found it familiar, and he may have known the herb garret.

Keats studied medicine at Guy’s Hospital, Southwark, from 1815 to 1816. The students of Guy’s Hospital and St Thomas’ Hospital were entitled to observe operations conducted at either hospital.

Prior to this particular operating theatre being built, surgical operations on women patients would have been conducted at one end of the Dorcas ward – a situation understandably distressing for the other patients, especially with a crowd of students all jostling for position, not to mention the fact that this was in the days before the use of anaesthetic. In 1821, it was decided to create a separate, purpose-built operating theatre nearby.

The operating theatre we can visit today was built in 1822 in the attic of St Thomas’ Church. While this may seem an odd location, the space was at the same level as the Dorcas ward, and was already used as a “herb garret”. We assume this means that the attic was used by the hospital’s apothecary to store and work with medicinal herbs.

The building containing the wards directly abutted the church, so patients could be conveyed through a set of double doors at the end of the Dorcas ward, into a vestibule, and from there into the operating theatre.

Keats qualified as an apothecary, but not as a surgeon. He quit medicine towards the end of 1816, and later died in February 1821, so he wouldn’t have known this particular operating theatre. However, it wouldn’t have been unfamiliar to him – at least in function, if not exactly in form – and there is a chance that he at least knew of the herb garret and perhaps even had cause to use it.

The Charing Cross Railway Company bought the hospital’s land, and in 1862 the hospital began to move to its current location in Lambeth. The operating theatre was closed.

I am not entirely sure of the chronology here, but the double doors leading from the Dorcas ward were bricked up. At some point, the internal structures of the operating theatre were stripped out. Also, some of the floorboards were disturbed in the early 1900s when electrical work was carried out relating to the ceiling of the church below.

Although the operating theatre and garret weren’t entirely forgotten, they weren’t physically rediscovered again until 1956, almost a hundred years since they were last used. Raymond Russell was researching the hospital’s history, and decided to investigate the space – which at the time was only accessible by climbing a ladder up to the only remaining “entrance” high on a wall.

Russell found the shell of the operating theatre still existed, along with the plaster work and the flooring. While the structures such as the standings had been removed, the place hadn’t been further cleaned out, so there were still plenty of clues showing what had been built where.

No other 19th century operating theatre in Europe has survived, so this location is unique.

The museum can be visited seven days a week. It contains all kinds of exhibits relating to the work of apothecaries and surgeons in Keats’ time. There is a small wall display about Keats, with images of him, giving a brief outline of his association with the hospitals.

First: Some of the surgical exhibits are not for the faint of heart! I am a tad squeamish, so I was rather nervous about this. However, I’ve visited twice now and found it easy enough to quickly glance past the worst of it – and there’s plenty of other things of great interest to make a visit worthwhile.

Second: Access is via a very narrow, steep, winding staircase in the church’s bell tower. There are 52 steps, so it’s a bit of a climb, and the only handrail is the thick rope running down the centre. I’m afraid there is no other way up to the attic if you are not in a position to be able to manage this under your own power.