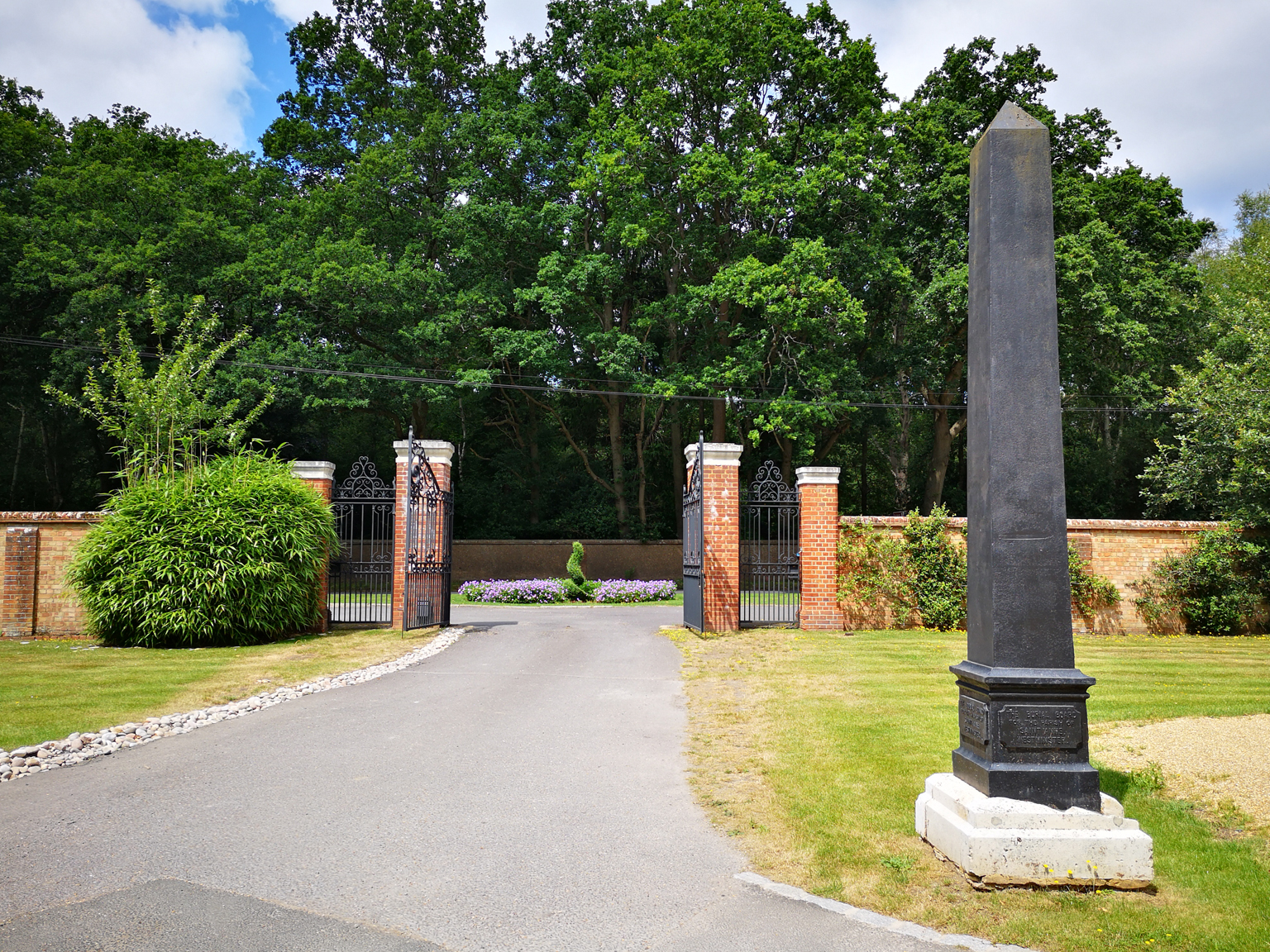 Some of John Keats’ most significant family members were re-buried in Brookwood Cemetery in 1959-1961. Keats wouldn’t have known the cemetery at all, as it only dates back to 1854, but I am sure he would want us to honour it as a Keats Location.

John Keats lost a number of significant family members over the years 1804-1818: his parents, his maternal grandparents, and his younger brother Tom. They were all buried at the St Stephen Coleman Street church in London.

The church was destroyed by enemy bombing in World War II, on 29 December 1940, and it was not re-built. When the land was eventually sold (to the Swiss Bank Corporation), the new owners were required to exhume and move the remains – a procedure to be “carried out with all due reverence”.

The exhumation and reburial was undertaken by the London Necropolis Co Ltd, starting in July 1959, and completed by September 1961. The remains were reburied at Brookwood Cemetery in Woking, Surrey.

Brookwood Cemetery, also known as London Necropolis, was opened in 1854. It was served by the London Necropolis Railway, with a dedicated railway station for departure in Waterloo, London. (You can still visit the Cemetery care of Brookwood station today.) The Cemetery is a huge site, covering 500 acres – the largest cemetery in the world at the time, and still the largest in the UK – and was intended to serve as London’s first choice of burial site for centuries to come.

It is no coincidence that burials at St Stephen Coleman Street were discontinued in 1853, at the time Brookwood Cemetery was being planned and developed. London was dealing with a “burial crisis”, as the growing population and consequent increasing need for burials were overwhelming the resources of churches and cemeteries within the city.

While Brookwood Cemetery never really dealt with as many new burials as hoped, the site was used for mass reburials. The large-scale engineering works in London taking place in the mid-1800s – the railways, the sewer system, the Underground, and so on – necessitated the relocation of a number of burial grounds. The first such relocation took place in 1862, when the development of the Charing Cross railway station and associated railway lines prompted the removal of the Cure’s College burial ground in Southwark; this involved almost 8000 bodies.

Eventually, when it came time to relocate the remains belonging to St Stephen Coleman Street in the mid-1900s, I assume that Brookwood Cemetery was the obvious (perhaps even the only) choice.

It was requested that the Rural Dean read a service over the re-interred remains.

I discovered this information about the fate of the St Stephen Coleman Street remains care of a visit to the London Metropolitan Archives. I then requested a Grave Search at Brookwood Cemetery. My thanks are due to staff at both these locations for their friendly assistance!

It took some searching, but the Senior Administrator at the Cemetery was able to confirm the reburial and its location:

I can confirm St. Stephen Coleman Street reburials are buried at Brookwood Cemetery; the location of the reburials is on the South side on Plot 70 St Agnes Avenue behind what was known as the old Masonry Yard (now known as Beard Constructions). Behind and beyond the Masonry works is one of several areas in this section of the cemetery used for reburial of human remains from churches and churchyards in London.

The Senior Administrator goes on to say that there would not have been any records of the deceased individuals, nor would a marker have been placed on the plot at the time. If there has been a memorial raised since then, it is not currently visible due to the area being overgrown. (The maintenance team will be clearing it in due course.)

It does seem a bit sad that these people who meant so very much to Keats are now buried “en masse” with no marker. The specific location makes some amends, with the address recalling his poem The Eve of St Agnes, and we can certainly consider them at rest in this lovely park-like setting. (Personally, I wouldn’t mind a whole swathe of ferns growing over me.)

Looking through the records kept at the London Metropolitan Archives, I found that there was some belated recognition that Keats’ family were involved in the relocation of remains. The London Archdiocese Fund was required to give notice of the re-interment so that any descendants could make suitable / alternate arrangements. There is a copy of a memorandum which refers to “a young lady” of “the Keats-Shelley Society” approaching them with a query about “a family member” of Keats. The general tone is rather unsympathetic, and she was told she was too late – though it seems she was less than a month past the deadline. My instinctive thought was that surely some efforts could have been made, but the note ends with the remark that perhaps it’s just as well she was too late, as what could be done? {virtual shrug} It hardly needs saying that this attitude rather undermines the “all due reverence” requirement.

There are later written queries from a London chap, dated 1969 and 1970, asking what would have become of the Keats family remains. While his query was referred to someone whose name I recognised from earlier related records (and who would have known the answer), there was no copy of any information being sent to the enquirer.

Which leaves the question open as to what, if anything, might be done now to honour John Keats’ family. They were good people, but not famous in their own right. Is it enough to know where they are, and to go pay our respects if we feel so inclined? On one hand, I am sure he would care deeply about them not being lost entirely to us. On the other, perhaps even he would consider a memorial of some kind to involve money better spent on the living. And after all, perhaps it is more a matter to be decided by the descendants of John Keats’ brother George and sister Frances.