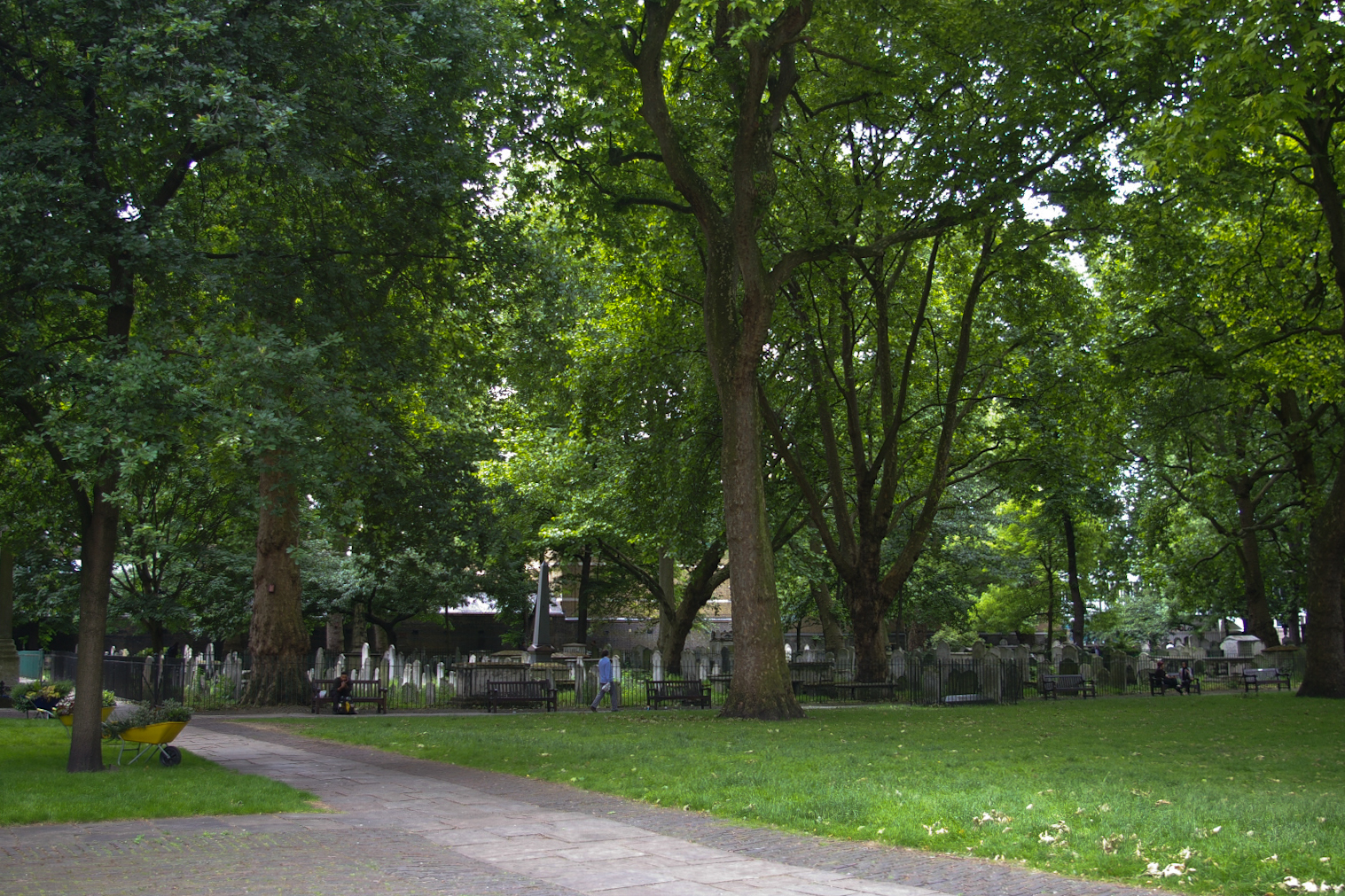 The Bunhill Fields Burial Ground has two sad connections with Keats. His youngest brother Edward was buried there, having died while still a baby. A little more than a year later, his father Thomas was fatally injured in a riding accident near the cemetery gates.

Edward was the fourth child of Thomas and Frances Keats, born on 28 April 1801. Unfortunately he died at the age of 20 months. I have never seen any details about a cause of death, but I suppose in a time of somewhat higher infant mortality, such things were lamentably not very unusual.

Edward was buried on 9 December 1802 in Bunhill Fields. Relatives of Keats’ maternal grandfather John Jennings had already been buried there, and it is also very near to where the Keats family were living in Craven Street, so it seems a clear choice of graveyard.

The burial register lists Edward as “brought from Craven Street City Road”, and buried in a common grave, at a cost of seven shillings and sixpence. It gives the location of the grave as 44 on the east-west axis, and 35 on the north-south axis. I’ll have to work out if I can visit to pay my respects (many of the graves are fenced off and inaccessible without a guide). I assume there’s no individual marker.

The Keats family moved back to the Swan and Hoop in Moorgate in 1802, when Thomas took over the management of the stables and inn on the retirement of John Jennings.

In the early hours of 15 April 1804, Thomas was riding home (south) along City Road when he fell or was thrown from his horse. We are not sure of the details, as it seems there were no witnesses to the accident. A nightwatchman saw his riderless horse heading for home, and found Thomas lying unconscious outside the gates to Bunhill Fields.

Thomas was taken to a nearby surgeon, but his injuries were beyond help. He was then taken home to the Swan and Hoop, where he died that morning, at the age of 31 years.

While the current gates on City Road only date back to 1868, the main entrance was in the same location in Keats’ time. (There used to be another entrance to the northern section of the grounds as well, but that was set back from the road, and only accessible via an alley between buildings. So I think it’s fairly clear that Thomas would have been found outside where the current gates stand.)

The name “Bunhill Fields” probably derives from “Bone Hill”. This dates back to 1549, when over a thousand cartloads of human bones were brought from St Paul’s (soon to be demolished) charnel house. The remains were spread over the moor and covered in soil, creating a flat ‘hill’ in the otherwise marshy landscape.

In 1665, Bunhill Fields was enclosed with walls to be used as a burial ground. The Church of England never consecrated the ground, however, and it was open for the interment of anyone who could afford the fees – so it became popular with Nonconformists.

Bunhill Fields is situated between Quaker Gardens on the west – the remnants of a Quaker burial field used from 1661 to 1855 – and Wesley’s Chapel across City Road to the east – a chapel built by John Wesley in 1778, which you can visit along with his house and his tomb.

Once Bunhill Fields became full – after approximately 123,000 burials over the years – the burial ground was closed to further interments from 1853.

The Corporation of London took on responsibility for running the ground in 1867. They began the process of turning the burial ground into a park – with new walls, gates and paths. It was opened to the public in 1869.

There was damage caused by bombing during the Second World War, and Vera Brittain also described Bunhill Fields as being the location of an anti-aircraft gun.

In 1949, following the war, landscape architect Sir Peter Shepheard was engaged to develop Bunhill Fields. His plans were finally implemented in 1964-65. Much of the original graveyard in the southern section was maintained, though fenced off. The more damaged northern section was cleared and turned into a community garden.