We shall have to consider Alderney, one of the Channel Islands, an honorary Keats Location! On 24 July 2019, the Guernsey Post released a set of six postage stamps commemorating the six lyric odes Keats wrote in 1819.

There is nothing (that I’m aware of) to indicate that Keats ever visited or had any connection with Alderney. I wondered if his ship, the Maria Crowther, might have put in there during his last voyage to Naples. However, the ship stayed close to the English coast due to challenging weather, and only started sailing south after Portland Harbour. The voyage is then described as passing the tip of Brittany before reaching the Bay of Biscay, which indicates that they passed by the Channel Islands at some distance.

Anyway! Why do any of us need a “reason” to commemorate our beloved English poet? Keats is probably best known by the mainstream population for these six odes, written in what biographer Robert Gittings called his “Living Year”, when he was 23 years old. This “Alderney issue” was designed by Keith Robinson, and features lovely illustrations that include Keats himself along with imagery drawn from the poems.

200th Anniversary of John Keats “Odes To A…”

It has been (and perhaps still is?) common practice for people to keep a lock of hair from a loved one as a memento. John Keats’ friend Leigh Hunt was particularly interested in doing so.

There are two locks of Keats’ hair that I know of, both taken by Hunt.

One lock is on display at the Keats-Shelley Memorial House in Rome. I’m afraid my photo of it is a tad out of focus, as of course it is kept safe under glass, but this will give you an idea!

I was particularly struck by the reddish tint still obvious in his mid-brown locks. Keats’ personal beauty was often remarked upon by his friends, and here is proof enough that his thick head of curly / wavy hair was indeed attractive. Mind you, I always did have a thing for redheads.

A second lock taken by Hunt was included in an album he owned, along with twenty other locks from authors and public figures. This album is now held by the University of Texas in Austin, USA. I am very grateful to the University for making the whole album viewable online – this link will take you to the exact page.

There are notations, presumably by Hunt, that he took “two locks” and that this one is “the later lock”. I am not sure that we have exact dates for either, but will look into it. The album included a (supposed) lock of Milton’s hair. Keats was inspired by viewing this to write the poem “Lines on Seeing a Lock of Milton’s Hair”, so he would have been delighted to have his own lock included in the same album.

The page includes a print of the drawing Severn did of Keats on his death bed in Rome, with the caption, “The last life sketch of Keats, by his friend Joseph Severn.” (Note that Keats’ year of birth, which was 1795, is given incorrectly here as “1796”.)

Again, the reddish-brown colour of this lock is striking. This was the generation before photographs became widely available – but these locks of hair, along with the life and death masks taken of Keats, enable us to feel confident of his appearance. You probably realise by now that I think he was a handsome fellow! ♥ 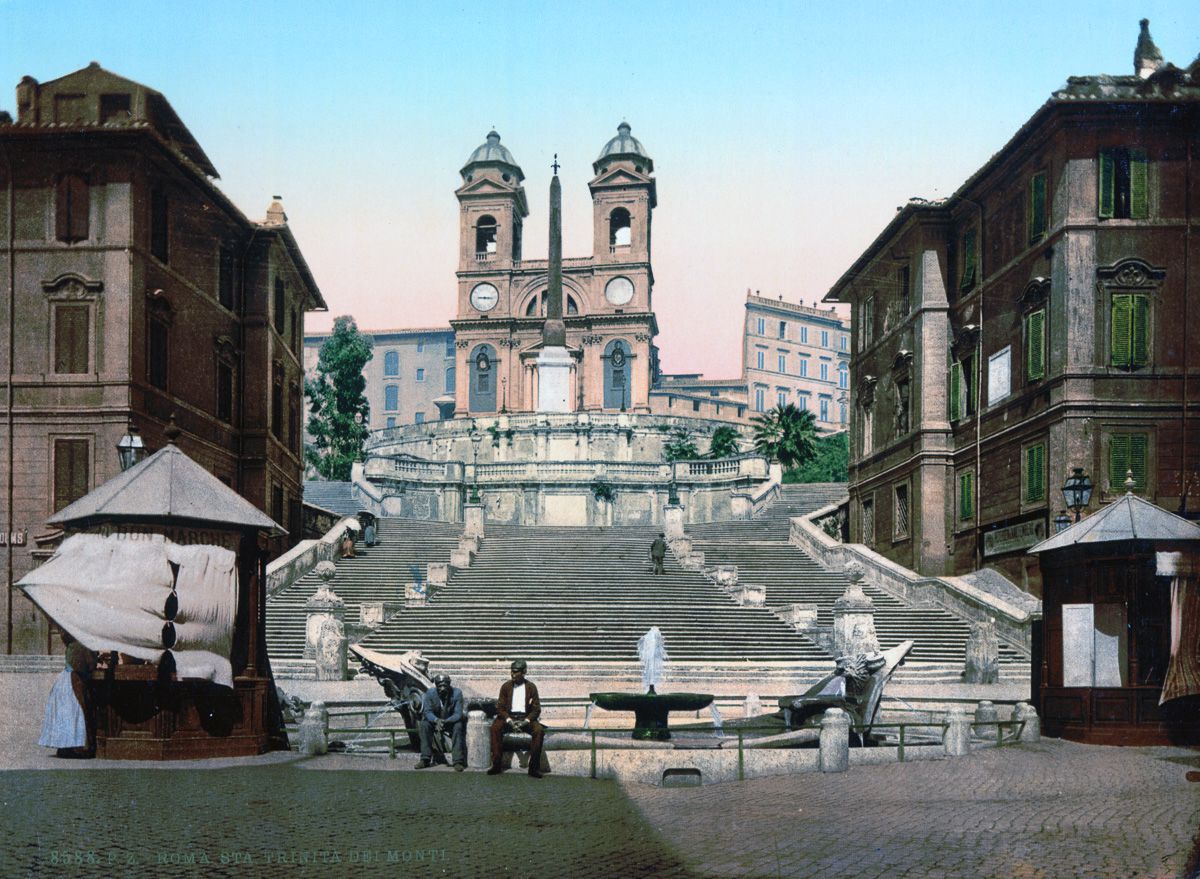 I found these truly lovely images on Mashable. They are ‘colour’ photos of Rome dating from c. 1890, sourced from the Library of Congress. These were taken seventy years after Keats was in Rome, but it still feels like a glimpse into the world that he would have recognised. Joseph Severn would have known this Rome, as he died only ten or eleven years before.

I’ve copied the two most relevant images here (with great respect, but without permission) and you can see the rest via the link below.

A lovely article that traces – in great detail! – Keats’ trip on the mail coach from London to Southampton on 14-15 April 1817. (And I’m delighted to see that this was written in the context of preparing a new collection of essays on the theme of “Keats and place”.)