John Keats as a person (and as a poet, and a letter-writer) is easy to love; his contemporaries found it so, and readers have continued to fall for him ever since. Suzie Grogan certainly did, and I did, too.

In her Introduction, Grogan quotes Keats as saying, “We read fine things but never feel them to the full until we have gone the same steps as the Author.” Keats was talking metaphorically, about empathy and life experience – but maybe he would have understood we Locations Geeks who enjoy tracking down the places he knew, and literally following in his footsteps. Some of those places and their treasures have been carefully preserved, while others have been significantly changed or even destroyed – but they all offer experiences and perceptions that enhance even the driest sentence in a biography and help bring it to three-dimensional life.

The first (and most substantial) part of this book is a lively biography of Keats, of the places he visited and the writings (both poems and letters) they inspired. Along the way we are given glimpses of Grogan’s own developing understanding of him and his work, from her teenage years, through her own serious health challenges, and into maturity. Chapters are organised mainly by location and then by chronology, so that we are not following Keats through time so much as through place; a deft way to handle his many to-ings and fro-ings.

The whole is lightly written and easy to read, but full of insight, and it conveys a great sense of Keats the man. It even begins with a consideration of the portraits and written descriptions of him by his friends, so that we might see him in our mind’s eye while we accompany him on his travels. For anyone new to Keats, I suggest this is an excellent place to start. There are weightier and more scholarly biographies, but Grogan admirably shows why it’s worth making the effort to read them as well.

The second part of the book provides a few paragraphs on each of those in the Keats Circle who’ve been mentioned during the earlier parts of the book. The focus is still firmly on Keats, however, and on these people’s influence on his life and work and on his later fame and reputation. This is followed by a chronology of key dates, copies of some key poems, and a bibliography.

Highly recommended to those new to John Keats, and to those who already consider themselves a “Friend of Keats”.

Note: I received a PDF ARC from the publisher, and this Keats Locations website is mentioned kindly in the Acknowledgements. But I was always going to be an Ideal Reader for this work, so you may take any gushing as a genuine response. (And I’ve already pre-ordered a hardback copy for myself.)

This was a brilliant biography, and I really enjoyed reading it. For Keats lovers, I would recommend it as a great companion to Andrew Motion’s Keats and Nicholas Roe’s John Keats: A New Life. It is wonderful to get the perspective of a woman on Keats as a person, and on Fanny Brawne, too. Amy Lowell was also a poet, and considers Keats’ poetry with a no-nonsense poet’s eye. The other aspect of this biography that stands out is that it was written a hundred years ago, and has a strong authorial presence – akin to that in 19thC novels – rather than the reticent, self-effacing authorial voice of modern biographies.

There are a few instances where Lowell reaches an incorrect conclusion, or where she didn’t have access to papers or knowledge discovered since her time. However, she always makes clear her line of reasoning, so the well-read Keatsian won’t find themselves astray.

There is a great deal of analysis of Keats’ poetry, which won’t suit every reader, but it is usefully integrated with his personal biography, and I happily read every word. Lowell is also great in her consideration of Keats’ almost religious approach to beauty, love and truth.

One of the things Lowell brings to the table is a clear love for John Keats – which is how many or even most people respond to him – and a personable manner in which the reader feels we’re sitting down with Lowell for a delightful long afternoon to talk together about one of our favourite people. Not that she lets her affection blind her, for she is always honest and open about those times in which Keats behaved or wrote in ways that were less than ideal.

I think it took this woman biographer to clearly see the problem with Keats’ letters to Fanny Brawne: his selfishness. Other people have written about his jealousies and insecurities, which are clear in the letters and are understandable (if not really forgivable) in the circumstances – but they are not the crux of the problem. Lowell gets right to the heart of it. As a result of this and of other very reasonable considerations, Lowell is utterly fair to Fanny Brawne as a patient, intelligent and loyal woman – an excellent match for Keats, even if his friends at the time didn’t see it or didn’t want to see it. One wonders why the controversy about Brawne and her suitability still lingers on!

Lowell is similarly clear-sighted and fair about Keats’ various friends and relations. Some of this was delightfully refreshing to read.

Highly recommended for all Keatsians. It’s out of print, alas, but worth tracking down!

Brilliant. Just brilliant. The biography by Andrew Motion has been my Keatsian bible for many many years now, and while I reluctantly began thinking it was probably about time for an update, I also dreaded the prospect. I really love and admire John Keats, and Motion was a big part of me getting to know him; I didn’t want to lose my (always inadequate, always conditional) grasp on who Keats really was.

Of course I needn’t have feared, and any courage needed certainly paid off. This is a great book, a truly great book, and I think it works perfectly as an addition to (or a complement of) Motion’s work as well as the work of others.

My take on Motion’s Keats is that he was both a poet and a medical man, a healer of both bodies and souls. Roe’s Keats is a poet (full stop), and any return to his training or work as an apothecary would have been a turning away from his true self. Which is right? I don’t know, but it’s very interesting to consider the question in such detail.

Roe’s strengths are in Keats’ early years – his childhood and then right through to his time at Guy’s Hospital – and in Keats’ poetry – which is given terrific context in the poet’s life and times, and thus enhanced meaning. Roe is also very knowledgeable about Keats’ relationship with Leigh Hunt – which is no surprise as Roe is also Hunt’s biographer.

Roe very interestingly touches on the idea that Keats was very conscious of passing time, and in particular the things that mark it: the anniversary of his father’s death, the new or half or full moon, the date he announced his decision to be a poet to his friends, and so on. Keats even contrived to die late on the day of the ancient Roman festival Terminalia, which honoured the god of boundaries. I’m not entirely sure how seriously we are to take this, but there’s no denying that Keats’ work often deals in liminalities, and Roe certainly conjured a number of relevant happenings and images along the way to give credence to this – especially the late-night farewells between young Keats and his teacher Charles Cowden Clarke on the bridge between their homes.

There were certain areas of Keats’ life that I felt weren’t given much space on the page. Especially, but not only, Keats’ love and fiancee Fanny Brawne. I’m not sure whether this is due to Roe deciding that such things had already been well covered (and I certainly think Motion does justice to Brawne). Or that 400 pages is enough, and something had to be dealt with truly though briefly. I’m hesitant to think that Roe didn’t think Brawne important… I mean, OK we’re not all interested in a man’s love life, but she was important to Keats the man and Keats the poet – and Roe does give her her due, even if a little too succinctly – so let’s go back to my initial thought of such things being covered well elsewhere.

Which takes me back further to the notion that this book is a great addition and complement to the existing work on Keats. And leads me on to the notion that perhaps, even for a life this short, there can never be a definitive ‘Life’. Read this, and read Motion, and read as much of the rest as you like. Keats himself will repay you well. 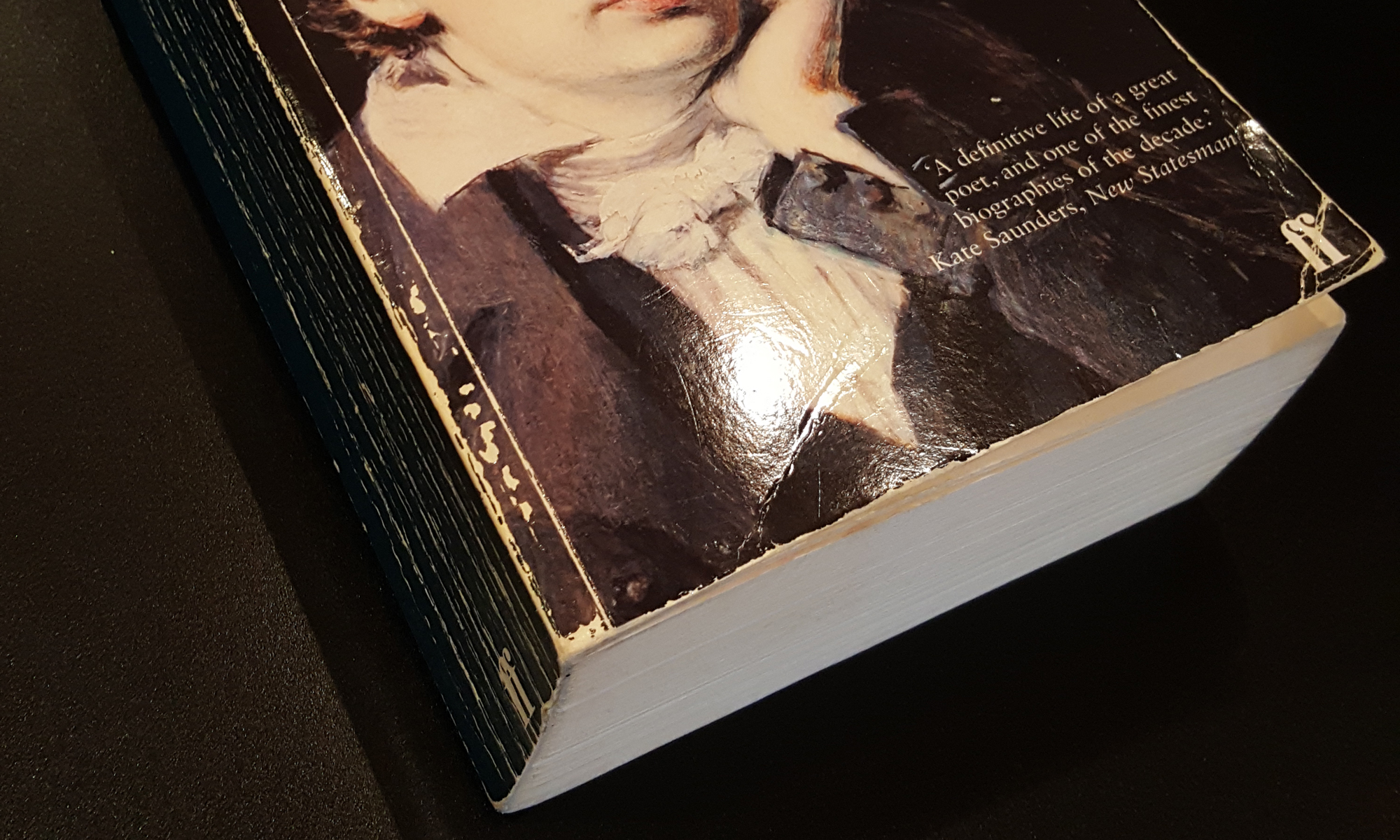 It is difficult to know what to say about this book! This biography by Andrew Motion, first published in 1997, has been my key text for years. (You can tell that by how well-worn my copy is, in the image above – and I’m someone who takes care of books, too!) It has become part of my mental furniture.

I came to really love the feisty and engaged young man that Motion depicted – and while Keats was as fallible and conflicted as any human must be, I feel that he is one of the best and most interesting people who’ve ever lived.

Perhaps it is best to borrow Motion’s own words. These are from his article in the Guardian about Jane Campion’s film Bright Star, which was based on his biography:

Keats’s story is amazingly charged: poverty, doomed love, extraordinary natural talent, lingering illness and early death. Of all directors, Campion, I thought, stood a decent chance of paying due respect to his high-flying genius, while at the same time proving that he was someone who kept close to the ground.

The next time Jane was in London, we met and talked about Keats for most of a day. There are a few other poets whose poems I prefer reading, but none whom I think of as combining such talent with such magnificent human qualities: his kindness, courage, good humour, exuberance, truthfulness and cleverness coalesce in the kind of adult wisdom it would be wonderful to find in a person of any age, and which seems not much short of miraculous in someone who died aged 25.

That is the person whom Andrew Motion wrote about in this biography. Read it – and if you’re not already in love with John Keats, then there’s a good chance you won’t be resisting any longer.

Motion gives the appropriate weight to Keats’ gift for friendship, to the power of his love for Fanny Brawne (cause of both ardent joy and deathly despair), and to his deeply felt vocation as a poet. I can’t recommend this tome highly enough.