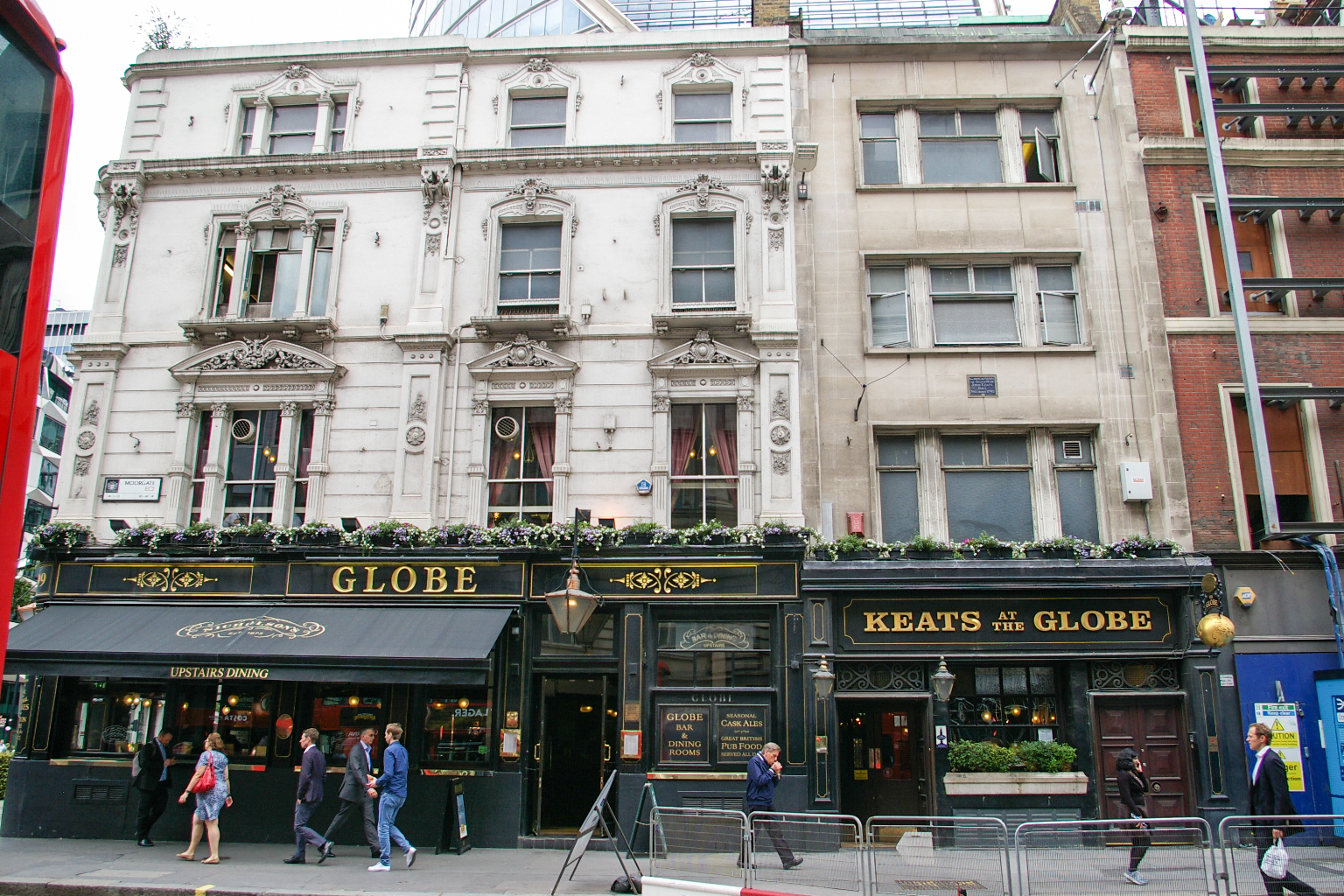 The Swan and Hoop Livery Stables, just north of the old London Wall, is assumed to be where John Keats was born in 1795.  The buildings of Keats’ time were demolished some while ago, and the current building now houses the Keats at the Globe bar.

The establishment was located just north of where Moorgate (the gate) allowed entry through the London Wall. Jennings was therefore ideally placed to cater for travellers journeying in and out of London along (what is now) City Road.

Jennings employed Thomas Keats at the Swan and Hoop – we think as an ostler, though as Thomas was able to keep his own ‘remarkably fine’ horse, his origins may have been rather less humble than that implies. In any case, Thomas married John and Alice’s daughter, Frances Jennings, in 1794, and the young couple lived either at the Swan and Hoop or nearby.

John Keats was born to Thomas and Frances on 31 October 1795. John was baptised at nearby St Botolph’s, so we assume he was born at the Swan and Hoop. Hence, the Swan and Hoop is where The Birthplace plaque is, but there is no definite proof one way or the other.

When John’s brother George was born in February 1797, we know that the family were living in Craven Street, Shoreditch (and George was baptised at nearby St Leonard’s), but we are not sure when exactly the family moved.

In any case, when John Jennings retired in 1802, Thomas Keats took over management of the Swan and Hoop, and the family moved there to live. (Note, however, that the Bunhill Fields burial register for Edward Keats has him “brought from Craven Street City Road” for burial on 9 December 1802. I am guessing the handover of responsibilities from John Jennings to Thomas, and the family’s move from one home to another, may have taken placed over an extended period, especially if Edward’s illness was prolonged.)

The youngest child, Frances Mary (Fanny), was presumably also born at the Swan and Hoop, on 3 June 1803.

When the London or City Wall was first built in Roman times, it blocked the course of the Walbrook stream, and this created a marsh or ‘moor’ along the north of the wall. Later, in the Middle Ages, when a small gate was built in the wall, it was named Moorgate after this ‘natural’ feature.

(The name ‘Moorgate’ is now associated with the original gate, the area, and the road on which the Swan and Hoop used to stand – so apologies if I am overly pedantic about identifying which I’m talking about at any given time.)

The marsh was slowly drained during the 1500s, and was eventually laid out as a formal park, known as Moorfields.

In 1672, Moorgate (the gate) was rebuilt as something more imposing – but in 1761, this was demolished to allow more traffic through.

In 1675-76, a new hospital was built along the London Wall running to the east of Moorgate, to accommodate the Bethlem Royal Hospital, infamously known as ‘Bedlam’. By 1791, this huge building was in very poor condition, and parts of it were uninhabitable. It continued to be used, however, until a new building was finally available in Southwark in 1815. Following this, the London Wall along that area was demolished in 1817.

As a child, then, Keats would not have known Moorgate as a ‘constructed’ gate, although much of the nearby London Wall was preserved. He would have known Moorfields as open parkland. And he lived literally just over the road from a deteriorating Bedlam!

I confess myself a tad confused over whether Keats would have known the road at the front of the Swan and Hoop as ‘Moorfields’ or ‘Little Moorfields’. Today, however, the thoroughfare is known as Moorgate. To the north, once it passes Ropemaker Street and South Place, the road becomes Finsbury Pavement.

I am not sure of the history of the current buildings at the Swan and Hoop’s location, but they certainly contain nothing that Keats would have recognised.

A pub named The Globe occupies the ground and first floors at 83 Moorgate, with an associated bar named Keats at the Globe next door at 85 Moorgate. The latter building is the one with the blue plaque, which reads:

In his biography Keats (1998), Andrew Motion says the frontage of the livery stables was ‘117 feet long’ (page 6). This indicates that the Swan and Hoop ran a fair distance up along what is now Moorgate, so I’m not sure if there’s a reason why 85 Moorgate is the claimant of the blue plaque.